You are here: Home / when your boyfriend 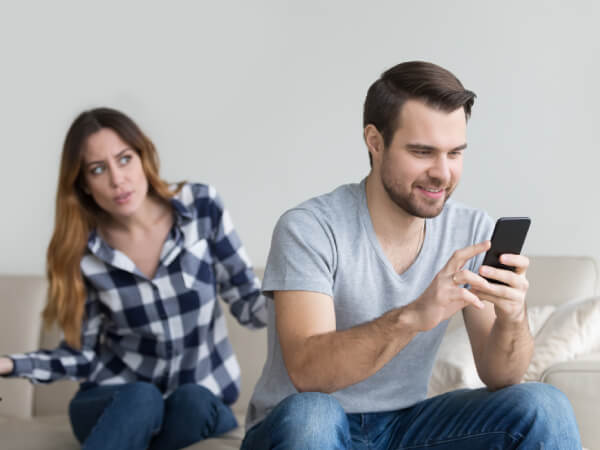 When you meet someone online and you start spending more and more time together, the last thing you’re thinking about is your online dating profile, let alone updating or deleting it. After all, you don’t want to jinx the relationship before it even has a chance to start. In the meanwhile, you might still get those email alerts when a new match has arrived. Most of the time, you ignore them because you’ve been seeing this new romantic interest pretty regularly. Other times, you get hit with a case of FOMO, or fear of missing out, and you take a gander at all the men or women you could be dating instead. Every now and then, you come across the online dating profile of someone you know, but when that someone you know happens to be someone you’re supposed to be in a relationship with, you can’t help but start questioning the validity of that relationship. It’s a dilemma that’s more common than you think when online dating turns into an offline relationship. The funny thing about being in a relationship when you’ve been single for so long is that you go into it having all these preconceived ideas on how you would react to certain dating situations, and you prejudge your future relationships based on your past ones. But when those unique dating situations suddenly become your present reality, you still feel like a deer caught in headlights no matter how many books about polyamory or open relationships you may have read.

I’ve been dating a guy I met online for almost six months, but he won’t delete his online dating profile. Given how much time we spend together, it’s really difficult for me to make a case against him keeping his online dating profile up if his ridiculousness of a truth is, in fact, a truth at all. He says he likes to read other people’s profile summaries for entertainment purposes while taking a crap on the toilet. Bull crap. I don’t buy it for a second, but in the spirit of trusting him, I went along with it anyway despite my own common sense. We’ve got a good thing going. Why mess it up with my own emotional hangups and insecurities?

If any other girl came to me with the same dilemma, I’d tell her the exact same thing dating expert Evan Marc Katz would say. He’s not that into you if he’s still looking at other women online. It’s not that he doesn’t want to keep spending time with you, it just means that he wants to keep his options open until someone he’s more into comes along. You’re Miss Right Now, not Mrs. Right. Katz makes a great point in one of his blog posts about this very dating dilemma online. A man doesn’t use online dating for anything other than it’s intended purpose – to meet new women. Here’s how Katz breaks it down in layman’s terms: “I don’t go to Amazon to browse books. I go there to buy. I don’t go to the gym to not work out. I go there to swim. There is simply no viable, reasonable, acceptable response he can make – even if, somehow, he has not met ANY new women since “committing” to you,” argues Katz. The dating expert goes on to say that while there is constant temptation to always be trading up, “the whole point of dating – for most of us, anyway – is to find one person that makes you want to quit altogether.” I honestly thought I had found that person, especially when he finally agreed to delete his online dating profile. “You’re my girl, and I love you. 10 minutes of weekly entertainment isn’t worth losing endless hours of entertainment from you,” he said. But then he did a complete 360 less than 24 hours later.

“We need to talk.” Four words no man or woman ever wants to hear at any point during their relationship. Nothing amazing has ever come out of those four words. My heart sank as the truth I had already known finally started to come out. Katz was right. A man can frame it any way he likes, but the simple truth is that a man doesn’t keep his dating profile up unless he wants to keep his options open. He wants to have the best of both worlds — that of being single, and that of being in a relationship — which now leaves us at the point of either breaking up or renegotiating the terms of our relationship. I think we can both agree that no two relationships are alike, and that being in a relationship doesn’t have to mean the same thing it means for most people, especially the kind of people who believe in marriage. A relationship can be whatever two people decide it to be, at least that’s my belief. We both care really care about each other and want to stay in each other’s life. The issue now is figuring out how and in what capacity.

Step 4: Be willing to walk away.

The toughest part about being in a relationship is knowing when to call it quits, especially when it’s not something you really want. Instead, it’s something you think has to be done as a courtesy and out of respect for that person when you know you’re going to eventually mess up. Breaking up is the easy solution when you’re operating under the guise of a traditional relationship, but there’s no such thing as traditional when it comes to online dating. In an idealistic world, you’d be able to have your cake and eat it too. But then again, so would your partner. It’s only fair. At the end of the day, you can’t really make someone be with you if they don’t really want to be with you. All you can really do is let him or her go in peace, and hope that maybe one day soon, he or she will realize before it’s too late what a truly great catch you really are. I wouldn’t hold my breath if I were you.