You are here: Home / tall guys 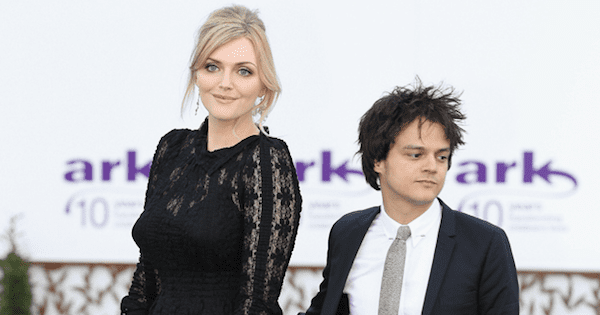 Does this couple look unusual to you? Unlike Sophie Dahl, whose husband Jamie Cullum is 8″ shorter, many women prefer to date taller men. I don’t know whether this is due to evolutionary biology (tall men might be stronger and better at protecting their offspring) or cultural norms (we associate height with status and wealth), but it does seem convenient to have someone who can reach things on the top shelf, and is easy to find in a crowd. On the other hand, dating a short guy has its advantages, too: you don’t have to strain your neck to kiss him! For whatever reason, the myth that “tall is better” is still widespread.
In this post, I will use 2.7 million interactions between Coffee Meets Bagel’s (CMB) straight members to see if women really do prefer tall men. I will also investigate something that nobody ever talks about: do men have a preference about women’s height? Along the way, we’ll see how people strategically fudge their height in order to seem more attractive. This post is all about CMB’s straight members, but I will cover our gay members in the next post!
Before I share the results, a quick refresher on how CMB works: Every day at noon, CMB introduces members to one single (a.k.a. a “Bagel”), whom they must LIKE or PASS within 24 hours. These Bagels are friends of friends who also meet the member’s basic match preference criteria – gender, age, race, religion – which the members tell us when they first register with CMB. The member sees these characteristics, along with the Bagel’s height, occupation, and more, before deciding whether to LIKE or PASS. A mutual LIKE leads to a direct connection via a private chat line that the couple can use to communicate.

How tall are you, really?

On average, the men of CMB say they are 5’10” tall; in comparison, according to the National Health and Nutrition Examination Survey, men in the United States between the ages of 20 and 39 are only 5’9.5″ tall. This difference is significant at 1% using a t-test. 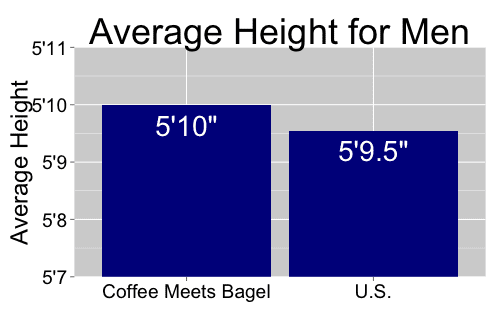 By comparing these two groups, I am assuming that there is no systematic difference between the men of CMB and the general US population of the same age. This might not be true if, for example, CMB had a disproportionate number of lumberjacks: 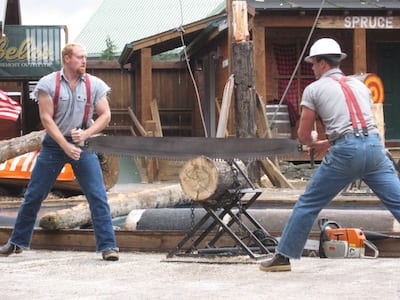 But another reason for the observed discrepancy is that guys are stretching the truth when they give their height. Men have two conflicting incentives; they want to be as attractive as possible, which (they think) means taller; but they also want to be honest, and know they can’t get away with exaggerating too much. After all, would you trust someone who turned out to be six inches shorter than they had said in their profile? They might reconcile these conflicting incentives with a small fudge. For example, a guy who might be somewhere between 5’7” and 5’8” would claim to be 5’8”. Little embellishments like this could add up to the half-inch gap between CMB’s straight men and the US average.
When Ok Cupid did a similar analysis, they found that their users exaggerated by a full two inches! Kudos to the men of CMB for being more honest than their counterparts on Ok Cupid.
Returning to CMB, we found that straight men seem to think that women find height attractive, and so strategically inflate their height. Do women do the same thing?

Do women lie about their height, too?

Yes: women exaggerate just as much as men do! 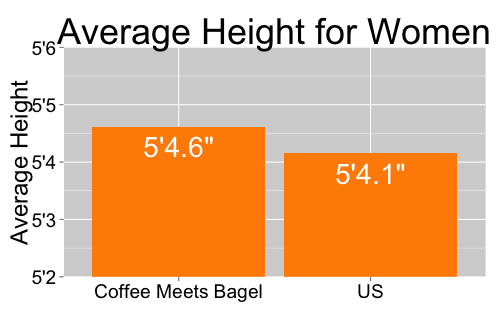 Evidently, they also think that height is an attractive quality to their desired partners. Both men and women seem to think that their desired partners are attracted to height, and so exaggerate their height. But is this really what their partners want? and even if taller is more attractive on average, what about relative height: how does my height compared to your height affect whether you will like me?

I’m going to start with straight women: how do a woman’s own height and her Bagel’s height affect how often she likes him? Let’s look at a few hypothetical women of particular heights and compare how they like men of different heights. 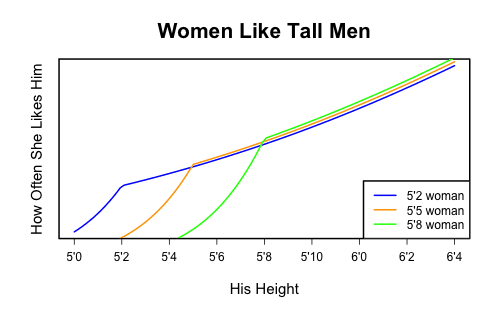 Women definitely like taller men, but dislike men shorter than themselves even more: notice the sharp change at the point where she is the same height as her Bagel. If he is shorter than she is, she is much less attracted to him: being an extra inch shorter decreases the odds of her liking him by 40%. If he is taller than she is, the taller the better, but the effect is nowhere near as dramatic: each extra inch only increases her odds of liking him by 10%. Now let’s look at this for women of all heights. 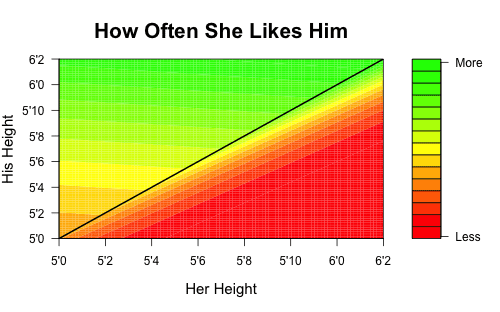 As long as her Bagel is taller than she is (above the line), women think that taller is better, no matter how tall she is. Straight men, then, have two valid reasons for exaggerating their height; being taller makes them more attractive to all women, but also makes them taller than a greater number of women, who desire a guy taller than themselves. Also notice that women over 5’10” are more open to dating someone slightly shorter, presumably because of the paucity of (and competition for!) guys taller than that. The stereotype seems to hold: straight women really do like tall men. But we saw above that straight women exaggerated their height by about the same amount as straight men. Is this warranted? do straight men really prefer tall women? 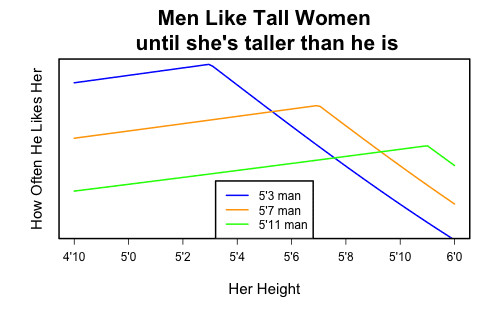 First of all, straight men definitely do have a preference. In fact, their favorite height for a woman is his own! You can see that each guy’s preference peaks at his own height; he doesn’t mind too much if she’s shorter, but his interest plummets if she is taller than him. Straight women, then, also seem justified in exaggerating their height. If she is shorter than he is, an inch of height increases his odds of liking her by 2%; however, if she is taller than him, an extra inch decreases the odds of him liking her by 10%. For women, being taller is more attractive to your average guy, as long as you are still shorter than him. As before, we can look at this for men of all heights. 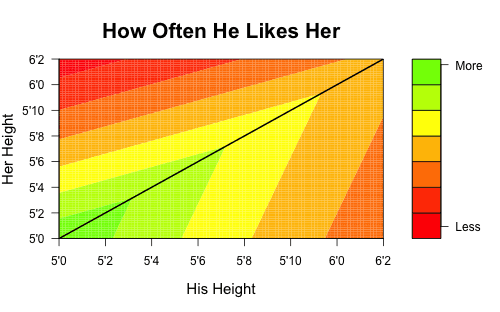 These chevrons are rotations of the upside-down V shapes we saw above, and have the same meaning: a man’s ideal is a women his own height, and strongly prefers a woman shorter than himself (below the line) to one who is taller (above the line).

Both men and women like their partners to be tall, but in a relative rather than absolute sense. Men slightly prefer tall women, but strongly prefer to be the taller one of the couple. Women feel even more strongly that their Bagel should be taller than themselves; as long as this is true, women of all heights prefer a taller guy. Men and women tend to agree that the man should be taller; this compatibility of preferences is good news for the future of our species! It is also good news for short guys: while it’s somewhat better to be absolutely taller, it’s more important that you are taller than your Bagel. With men’s natural height advantage, you will catch the eye of plenty of shorter women. Given these preferences, it’s no surprise that men exaggerate their height; it makes them more attractive to all women, and also taller than a greater number of women, increasing their attractiveness to that group. But I must issue a word of caution to the women out there who are exaggerating their height: this makes you a bit more attractive to the guys who are still taller than you say you are, but much less attractive to the guys who are your height, but not as tall as you claim to be. But if you and he both exaggerate by a half inch, you’ll be perfect for each other!
Did you enjoy this post? Read more dating stats about how the number of singles in your city affects who likes you.