You are here: Home / success stories 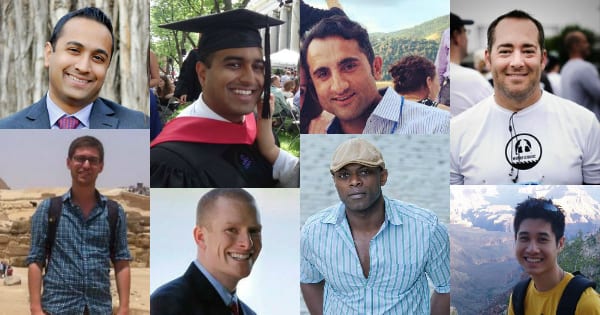 Here in the CMB office, we have a fun tradition. When we get news that two bagels have found each other, we ring a bell and mentally pat ourselves on the back. And let me tell you, that bell was ringing quite a bit in 2014. Our job is to help people find love, and it’s always nice to hear when we’ve succeeded. As the year comes to a close, we thought we’d share some of the sexy men we’ve lost to Coffee Meets Bagel initiated relationships this year. While, yes, you might be a little sad that you missed your chance to match with these gorgeous men, it’s also always nice to hear when anyone has found Mr. Right. We couldn’t be happier for these men and their ladies; many congratulations to them all! For those of you still waiting for your perfect bagel, here are 8 hunks that prove how well Coffee Meets Bagel works — who knows, maybe you’ll find yourself on this list next year! 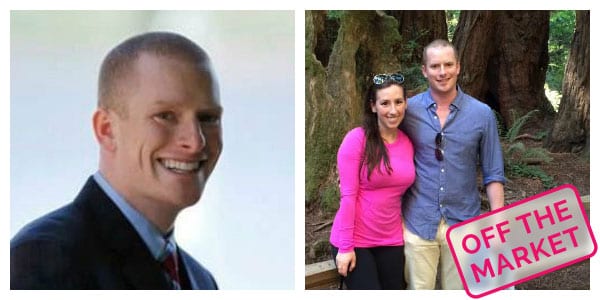 Occupation: Management Consultant
Broad-shouldered, smart consultant? Yes please! No wonder he is off the market!

2. Ehsan from San Francisco, unavailable as of March 2014 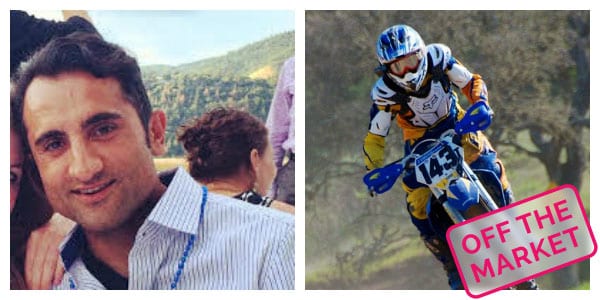 Occupation: Product Design Engineer
Brains and Bikes, Ehsan is the total package. Do you think his fiancé and him are going to drive off into the sunset on his dirt bike? 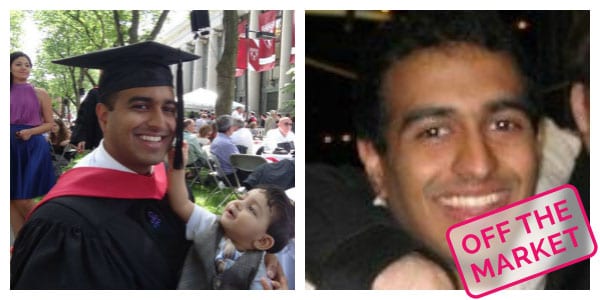 Occupation: Attorney
I object to this cutie being off the market, but that would probably be overruled pretty fast.

4. Gordon from New York City, unavailable as of February 2014 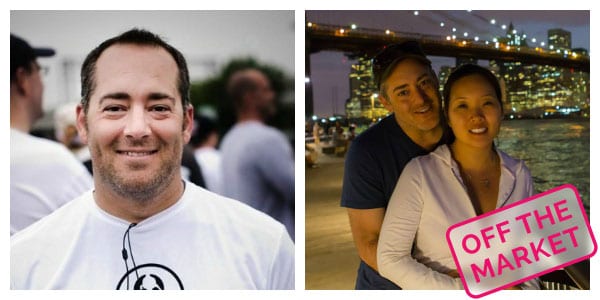 Occupation: IT Consultant
It’s no surprise that this tech-savvy stud used technology to find his dream girl. 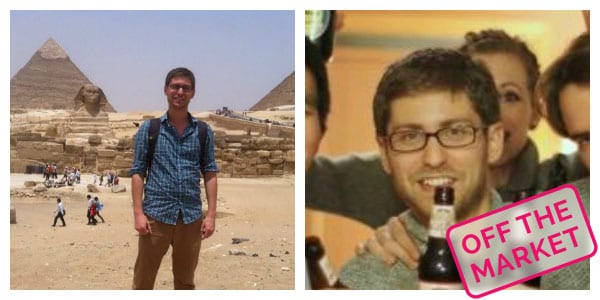 Occupation: Economist
After dealing with big numbers at work all day, we bet Alex was happy to have finally found his Bagel!

6. Jay from San Francisco, unavailable as of September 2014 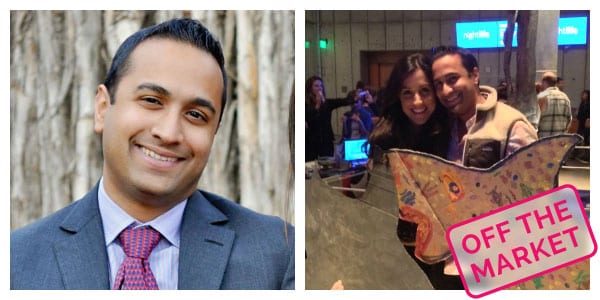 Occupation: Business Development and Marketing
Look at that smile. Melts my heart for sure!

7. John from New York City, unavailable as of February 2014 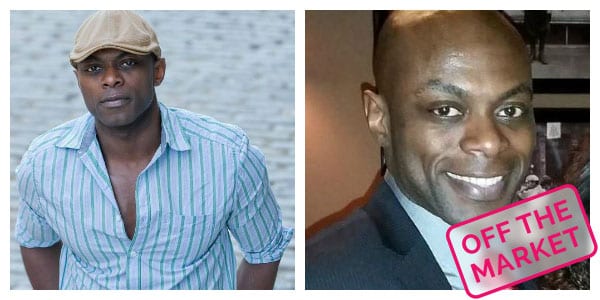 Occupation: Director
Directors always have an eye for making sure everything is just right, so John probably knew right away that his (now) fiancé was his perfect match.

8. Tony from Washington DC, unavailable as of July 2014 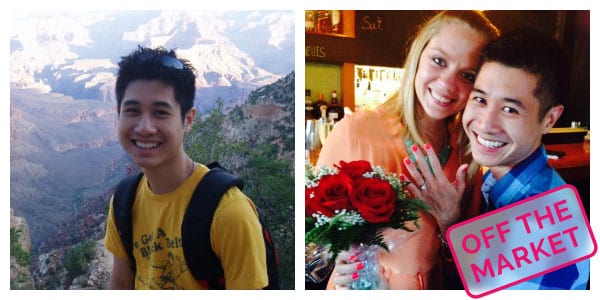 Occupation: Attorney
Tony and his fiance are adorable together, look at both of those great smiles!
Want to see more beautiful men who’ve been off the Market for a whole year now? Check out last year’s list here. 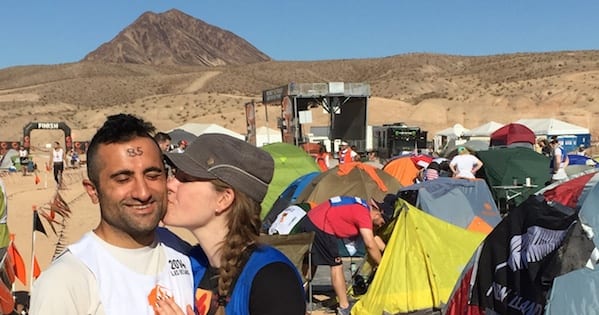 What started with a bottle of Prosecco and a box of canolis has evolved into yet another beautiful coffee meets bagel relationship! Ehsan and Leanne were both looking for someone that they really clicked with, not just a casual hook up or one night stand. We’re happy to report that they finally found what they were looking for.

Leanne heard about Coffee Meets Bagel in an VentureBeat article “5 Dates In 5 Nights.” The (very smart) journalist promised exactly what CMB delivers: high quality, well-matched dates, so Leanne signed up. It was Ehsan’s roommate who told him about Coffee Meets Bagel; He wasn’t interested in swiping through endless profiles and never hearing back from anyone he messaged, so CMB sounded right up his alley.

Easily one of the more adorable things Ehsan told us about getting Leanne as a match was that he “actually laughed out loud” because she was so “stunningly gorgeous.” She had to have been a ploy by the app to keep him interested. There was no way he was going to match with this beautiful woman… at least that’s what he thought. Contrary to what he thought, Leanne was not a ploy, was indeed a real live beautiful woman and she thought he was “adorably handsome!” She liked that his pictures and bio portrayed him as an outdoorsy, smart, genuine person. They soon learned that they’re both really active people, and it was important to Ehsan that he find someone who could keep up with him. Little did he know what Leanne had in store for their first date. 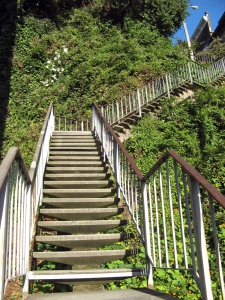 This is just a section of the stairs Leanne and Ehsan hiked up on their first date.

This is where the prosecco and canolis come into play. Leanne told Ehsan to meet her in North Beach, San Francisco on a (soon to be fated) Saturday afternoon. She then proceeded to “drag” him up 400 steps to a park at the top of the hill. She took note of his ability to keep up, and that was just the beginning of the things they came realize they had in common that day. They spent the afternoon walking around the neighborhood, just talking. Ehsan told us that, despite the fact that he had a bike race to prepare for the next day, he hung out with Leanne for the rest of the day. He ended up pulling an all nighter fixing his bike, but said he had a smile on his face the whole time. 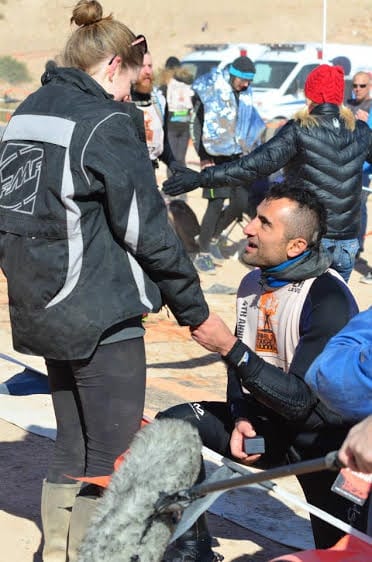 Ehsan and his two favorite things — his fiance, and dirt bikes.

Unfortunately, life gets in the way sometimes, and the day after their second date, both Ehsan and Leanne went on trips abroad for several weeks. He was in Asia and she was in South America, a 13 hour time difference, but they still managed to catch each other on Facebook messenger every day. Leanne says she would lie in her hostel bunk talking to him and note how ridiculous the location stamps on their messages were. “sent from Shenzen”, “sent from Buzios” they would say. Leanne also told us that their daily chats were never planned, “they happened organically because we enjoyed each other’s conversation so much.”  Ehsan even said he actively tried not to think about Leanne while he was away because he knew it would only make his trip seem to go by slower.

In Leanne’s words, “I got back to San Francisco on a Sunday afternoon, and Ehsan came over the same night. :) The rest is history.” Bottom line is, Ehsan and Leanne are now engaged!

There is some kind of beauty in the act of pining for another person. Leanne and Ehsan’s story about their time apart, after only having been on 2 dates, is a classic example of the curveballs life will throw your way. BUT when it’s right, it will work. We are so happy for you Ehsan and Leanne! Congratulations! 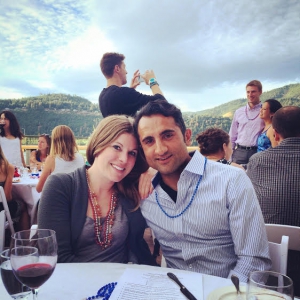 The happy couple. Congratulations you two!