You are here: Home / statistics of love 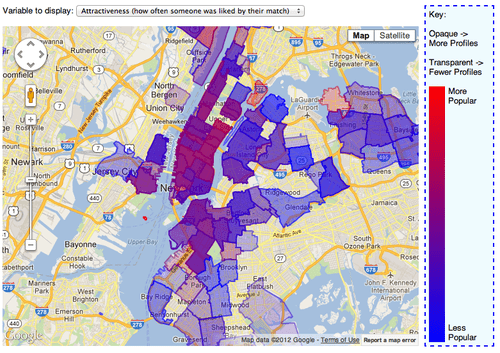 We wanted to dedicate this week’s post to something very New York and thought it would be fun to compare some statistics across the 5 boroughs of New York (plus our friendly neighborhood, NJ). Specifically, how does our members’ popularity differ by neighborhood?
Here is what we’ve found (Unfortunately we did not have enough representation from the Bronx and Staten Island so those two were excluded).
Attractiveness score was the highest in Manhattan. This was not surprising, given that Manhattan make up the largest percentage of our member base, and as a Manhattaner myself, crossing the bridge to meet someone for a date is, of course, unthinkable(!). What’s more interesting to me was the attractiveness score within each of the boroughs.
Manhattan: Midtown/Upper Eastside turns out to be the attractive neighborhood within Manhattan. (too bad I live on the west side) Financial District + Harlem turned out the least popular, perhaps due to their remote(?) locations. A question for you: Does it matter where your date lives, as long as they reside within Manhattan? I guess another question is whether people make judgement on others based on their zipcode. Queens: Sunnyside scored the most popular within Queens. The least popular was…Astoria. Brooklyn: Fort Greene & Park Slope area scored the highest within Brooklyn. Parts of Williamsburg turned out to be the least popular. Finally! New Jersey: Surprisingly despite the disadvantage in location, Fort Lee & Engelwood turned out to be quite popular… I hear that there is a large % of Koreans living in Fort Lee. :) What might be an interesting next step would be to correlate this with other demographic data, such as income or education level by neighborhood to see if there are any relationships. But that’s all for now folks! We would love to hear your comments as always.
Have a great weekend.

How athletic are singles in NYC & Boston area? What is the most popular sports among them? Lastly, which sports make you the most desirable?

The London Olympics 2012 is coming to an end soon but to continue the fun, Coffee Meets Bagel analyzed 68,000+ matches to uncover the relationship between love & sports.

1. How athletic are singles in the NYC & Boston?

2. What is the most popular sports?

3. Which sport makes you the most desirable???

Happy Olympics everyone!
*Special thanks to our members John & Krizia for the awesome findings