You are here: Home / gender differences 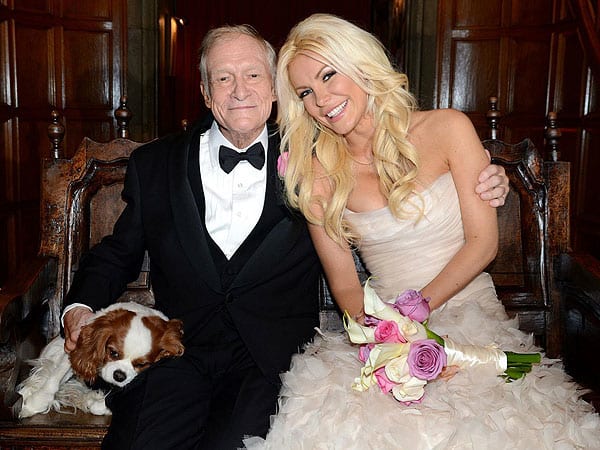 The following article is a guest post, courtesy of Everett Wetchler

Ladies firstIt’s a nice thought. “Love is blind.” “Money doesn’t buy happiness.” “Cocoa Puffs are part of a balanced breakfast.” Alright, only General Mills and I say the last one, but “age is just a number” is one of those mantras that may not be as true as we’d like it to be. Or is it?
At Coffee Meets Bagel, we get to test a lot of theories about human relationships, using our superpowers of data, statistics, and nosiness. Today let’s look at age in heterosexual relationships. There are many urban myths in this department — that women like older men,  that men like younger women (and avoid women over 30), etc. We’ll look at these as we analyze how often users of various ages “Like” each other on the site. There are a few trends to note here.
At first glance, it seems that women mostly like men who are a little bit older. This comes as a shock… to nobody.
The line of red blocks along the bottom shows that women lose their taste for men quickly when they’re even a little younger.
What is surprising, though, is that women seem pretty happy with men the same age. Follow that dotted line — it’s mostly pleasantly green blocks. Averaging across users, let’s graph women’s tastes based on the difference from his age to hers. 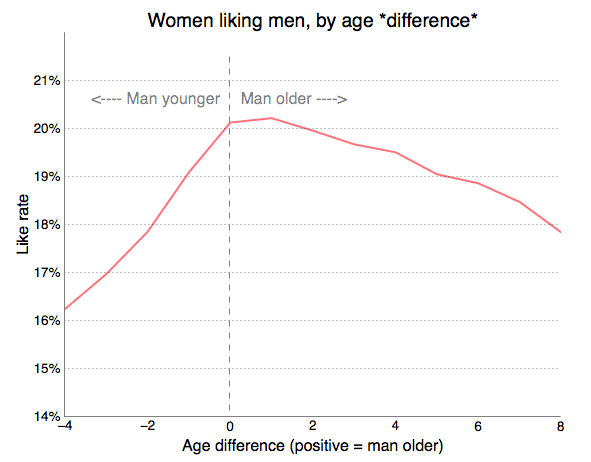 Women’s first choice, in fact, is men about the same age. Being younger costs them dearly, but being more than a little older costs them too. The myth of women being drawn to significantly older men (“Silver Foxes”) is just not supported. Hugh Hefner’s harem aside, it seems most women are not looking for the oldest, richest guy around. *Polite clap*
One more question — do women get less choosy as they get older? Let’s break up that last graph by women under and over 30: 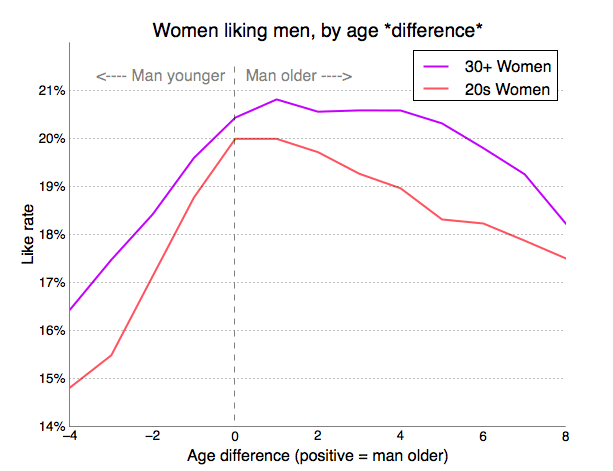 Older women universally “Like” men more often, of all ages, so yes it appears they get (marginally) less choosy. Especially when considering more-than-slightly-older men.
In brief: women aren’t actually seeking older men, but they are more tolerant of them. To a point. Silver foxes, besides George Clooney and the Dos Equis guy, are still more wrinkly than sexy.

On to the gentlemen

Buckle up boys, it’s going to be an uncomfortable ride. 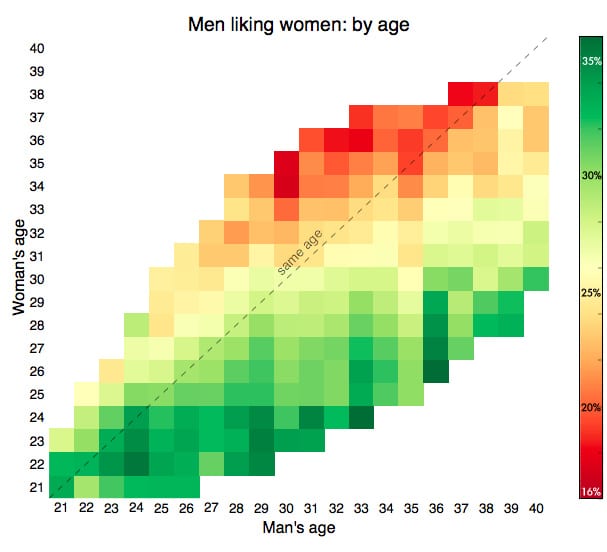 First, look how smooth this pattern is. The women at least required some thought to understand, but men’s tastes are about as complicated as a four-piece jigsaw puzzle.
Men of all ages will resoundingly pass over a younger woman for an even-younger one (the blocks get perpetually greener going down, as women get younger). You might expect that there would be at least SOME point where a woman being younger stops being better, that men would find such youthfulness immature or short on life experience, but that doesn’t happen.
Just to highlight how impressive this is — here is the same graph, with a line drawn in the bottom-right for the (admittedly unscientific) half your age plus 7 rule of socially acceptable dating. I relaxed the sample size threshold a bit (so there are more blocks filled in, but you can see it gets noisier) to clearly show what “over the line” behavior looks like. 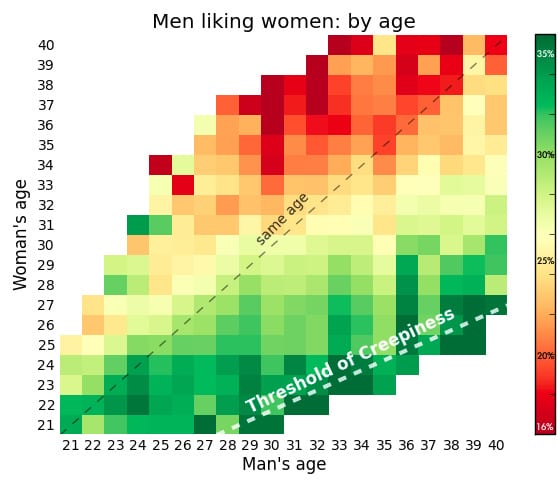 Not only are men OK with women below the half-age-plus-7 line, but those ladies are their FAVORITES. Different cultures have different views on age disparity, but it appears that the male appetite for younger women knows no bounds.

On that note, let’s recap. Women care about a man’s age *relative* to her own, while men care substantially more about a woman’s *absolute* age. The graph below drives the point home. 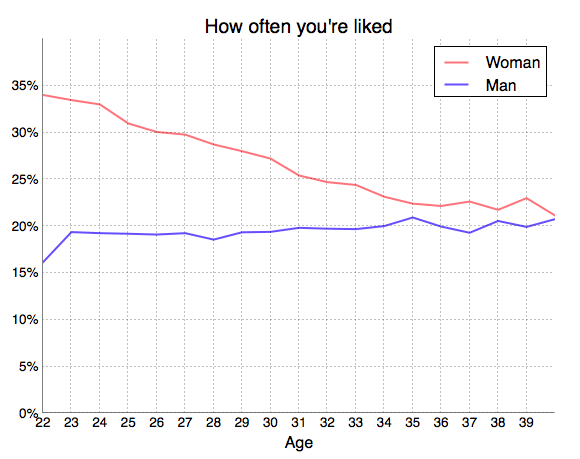 Other things equal, a man being older doesn’t help him a lot. But for women, the message is clear: younger = better liked. It may not be convenient, but there you have it.
For women, it’s also interesting to note that there is nothing special about the age of 30. The downward slope is pretty consistent from ages 22-35, with every year mattering about the same as the next. So relax about hitting the big three-oh. That one really IS just a number.

In search of a cause

This is where data analysis becomes more art than science. Yes, men tend to prefer younger women, that’s pretty conclusively supported. And yes, the All Men Are Scoundrels theory is one (cheap) explanation that fits. With a little outside research, however, we could tell another story.
Let’s back up. Why do we date? Lots of reasons — for fun, for sex, for companionship, or to start a family. And according to this data, men (not women) choose their dates to optimize for starting a family. Subconsciously at least.
I’ll back that up in one word: fertility. Well, two words: historical fertility. There’s a great wikipedia page on Age and Female Fertility, but the upshot is summarized in one sentence: “A woman’s fertility peaks in her early and mid-20s, after which it starts to decline, with this decline being accelerated after age 35.” As you can see in the graph above, the gap between how often men and women are liked is greatest at 22, and gradually declines, eventually vanishing around 35. Whether you buy the causality is up to you, but the biological correlation is undeniable.
Granted, with modern medicine women have a high chance of conceiving well into their 40’s, but for 99.99% of human evolution, this was not true, and men’s tastes are likely not up to date. It’s a pretty safe bet that, in most situations, men aren’t thinking about conceiving a baby when they ask a woman out, but their preferences certainly correlate with that motive.
Shouldn’t women care about fertile men, too? Male fertility is a significant issue, with the onset sooner than you might think. A man’s virility peaks around age 22, declining over time, and as he enters his 40s, it can take many more months to conceive a child with his partner. Yet women’s tastes resoundingly don’t vote for the fastest swimmers. They vote for men who are about the same age, regardless of what age that is. Perhaps they are optimizing for long term companionship, or parental investment, and indeed their preferences align extremely well with what actually happens in marriages.

The takeaway here is not that a woman’s desirability is purely a function of her uterus. Everyone, men and women of all ages, are liked at minimum about 20% of the time. Being a woman with a high historical fertility helps her chances, but it’s still a minority factor. Let’s take that graph of how women are liked by age, and color some things in: 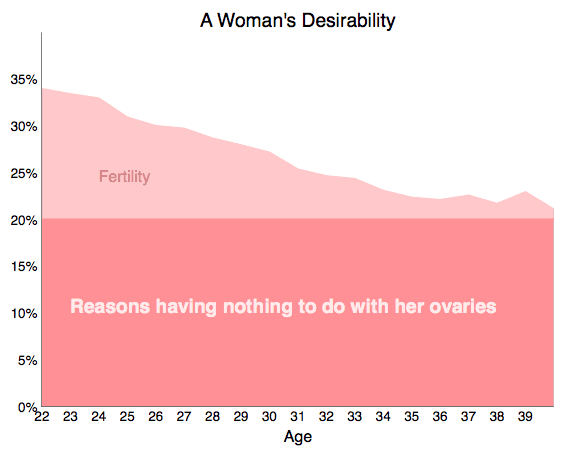 We can’t just compare the raw size of these regions without committing crimes against statistics, but the overall point is still legitimate: most of why people are liked, male or female, has nothing to do with their reproductive ability. For any age, even 22 year old women, more than half of their appeal is not fertility-motivated.

One bonus of being an older woman is that while you get fewer likes on average than your younger counterparts, those likes are much more attributable to something specific to you. Here’s a couple of pie charts showing the tradeoff: 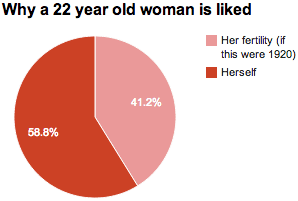 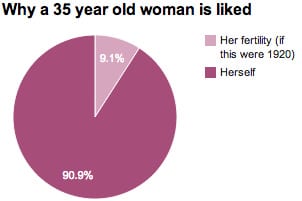 The dating game undoubtedly changes with age. But depending on what you’re looking for, it may only get sweeter.
Did you enjoy this post? Then make sure to check out another dating stats piece: Attention All Nerds! Are Nerds Really The New Cool?