You are here: Home / dating experiment 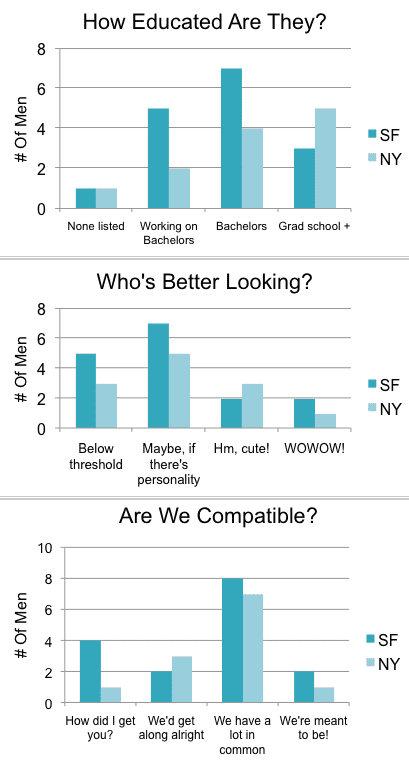 There are four single gals working at Coffee Meets Bagel and you know what that means -most of our noons are spent comparing our Bagels and 90% of our office conversation revolves around dating & guys. One of these many conversations was on online dating with guys in SF vs. NY, as some of us are native Californians and some relocated from NY. The heated debate about the quality of guys in the two cities led to an interesting experiment proposal: To sign up for an online dating site in both NY & SF with the same exact profile and compare the guys that approached us. (We selfishly didn’t want to “experiment” with our own members so signed up for another site which shall remain anonymous). Of course, I was picked as a guinea pig.

In just one weekend, I found a city’s dating scene is very much reflective of its culture.

Let’s start off with NYC. From the 12 messages that I received in just 2 days, I noticed a trend between them all. The basic theme was “What’s your number? Let me buy you a drink.” The messages were blunt and straight to the point; it was as if all these guys were pressed for time! They weren’t looking to make a small talk with me through online chat – they wanted to meet me and see for themselves what kind of person I am. Very reflective of the NYC culture: fast-paced, direct, and upfront.

The dating scene in SF was a whole other ballgame. From the 16 messages I received, what I experienced was long chats on Saturday and Sunday nights about topics ranging from school to work to music. Whether or not they were doing this because they wanted to get to know me or they were just timid, I guess I’ll never know. What I do know is that these guys were definitely not the “let’s meet up now and figure out who we are later” type; these guys wanted to get to know me before they made their decision to ask me out. To me, this seemed much more familiar. As a Bay Area native, I’ve grown accustomed to a slower environment of dating and getting to know someone. Things are much more slow-paced and relaxed. And the winning city is…!!

So what’s the verdict here? Surprisingly enough, I found myself preferring NYC’s style. I thought I would prefer the more relaxed appeal that SF had to offer, but there was something in the straightforward, “I-don’t-have-time-for-small-talk” attitude that I found so refreshing. My heart belongs to the Bay Area, but I have to admit: I much prefer the no-bullshit approach that NYC has to offer. SF guys! Can we be a little bit more blunt!

About the writer: Michelle is the Head of Community at Coffee Meets Bagel.