You are here: Home / assholes 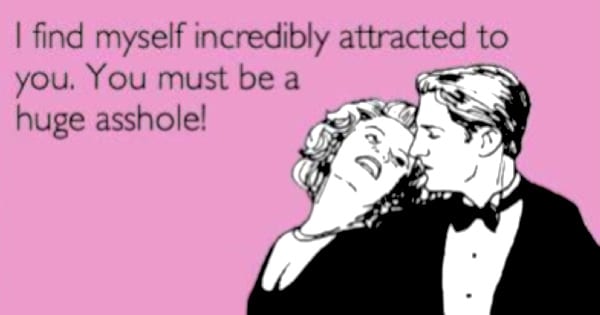 It’s only logical to be attracted to kind people. However, it is also common knowledge that a lot of people go through a stage in their life where they keep finding themselves attracted to assholes (note that I use this term equally for men and women). Why oh why do we keep doing this to ourselves?! Well, thanks to studies conducted by social psychologists from the Interdisciplinary Center Herzliya, the University of Rochester, and the University of Illinois at Urbana-Champaign, we finally have some insight as to why the heck this is such a common problem, especially for straight women.
First, let me specify what exactly I mean when I say “asshole” in the context of this study. Obviously, this is not a scientific term; formally, the studies measured how attractive the opposite sex is to “responsive” people. “A responsive person is one that is supportive of another’s needs and goals,” explains Jen Stantisi, a writer for The Society of Personality and Social Psychology. Therefore:

asshole \as-ˌ(h)ōl\ n.  non-responsive; person who plays hard to get; person not outwardly expressive of their attraction to another

Being responsive to your partner is wildly important to a successful relationship — both emotionally and in the bedroom — but is it attractive from the get-go? At least for women, the answer seems to be a resounding “no.”
The study paired up men and women with a “responsive” and “non-responsive” partner and had them interact (you know, like a first date). After the interaction, the participants were asked to rate how masculine or feminine they perceived their partner to be, followed by how sexually attracted to them they were. Guess what?

Yes, you read that right: the less responsive guys were (i.e. the bigger of an asshat they were), the more attractive women found them.
Ladies, how many times have you whined to your girl friends about how long it’s taken for a guy to text you back after a first or second date? Thousands, right? So, we have to admit that our alleged attraction to their evasive behavior is totally illogical. I mean, I get it, men are confusing; you have a great time on a date and when you text him afterwards, he seems weirdly nonchalant about it. But, as much as we hate to admit it, or whether or not we realize it, many of us enjoy the chase. As a feminist, this is disappointing for me to admit, but I like the challenge, finally “winning a guy over” gives me a confidence boost that I can’t find many other places. In reality, I think us ladies really do hate the chasing aspect of it, but we love finally catching up — even if we’re totally out of breath and exhausted.
Men, on the other hand, love being chased — it gives them what I assume to be a similar confidence boost to the one women get when the chase is over. And since women secretly (or not so secretly) like to do the chasing (or at least the catching up), and men like to be chased, it’s only logical that men would continue to behave in a way that makes women feel like they have to “chase” him.
Being open about your feelings in a budding relationship can be scary. Chances are, you’ve been hurt before and your first instinct is to protect yourself and your heart. However, what this study shows us, and what men may not realize, is that a woman’s ability to be open and honest about her feelings is attractive to men. Responsiveness (openness, empathy, kindness) are qualities that men innately look for in women. The study even shows that men find responsive, (therefore more feminine) women more sexually desirable.  We’ve all heard the theory that men love the “mean girls” — there’s a bestselling book called “Why Men Love Bitches” for Pete’s sake — but thankfully this study shows us that’s not true after all!
While the study explicitly asked women if they saw responsive men as less masculine and the common answer was no, it’s my personal opinion and experience that this isn’t quite accurate. Women I know, myself included, are often turned off by men that we see as effeminate, and unfortunately, because I think a lot of women see men who show their emotions right off the bat (responsive men) as feminine, we are less attracted to them. You could argue that this is simply basic human instinct; women search for strong, masculine men because they are likely to gather the most food and protect the group or family the best, ensuring the female and her offspring’s survival. Unfortunately, in our society, being masculine (or unfeminine at least) is often equated with being an asshole.
With a background in social psychology, I can’t say I’m surprised that I’m not alone in my hypothesis. Professor Gurit Birnbuam, lead researcher in this study, agrees.

Women may perceive [a responsive] person as inappropriately nice and manipulative (i.e., trying to obtain sexual favors) or eager to please, perhaps even as desperate, and therefore less sexually appealing. Alternatively, women may perceive a responsive man as vulnerable and less dominant.

But dudes, don’t take this as an excuse to be an asshole. Acting casual is different than being non-responsive. And ladies, don’t ever stop being honest about your feelings. While some might fear that this will make them seem “crazy,” — I hate when people call me that for being honest about my feelings — men actually find it more attractive. Bottom line, confidence is the sexiest trait you can find in any partner, man or woman, so be as casual as you want, but be confident in yourself, your desires, and your feelings for the people you meet. Trust me, it’s a lot easier than beating around the bush.
If you liked this post, check out Is Watching Porn When You’re In A Relationship Cheating?