You are here: Home / CMB Says / CMB Updates / We are working with Yelp and Spotify to make your first date a success... 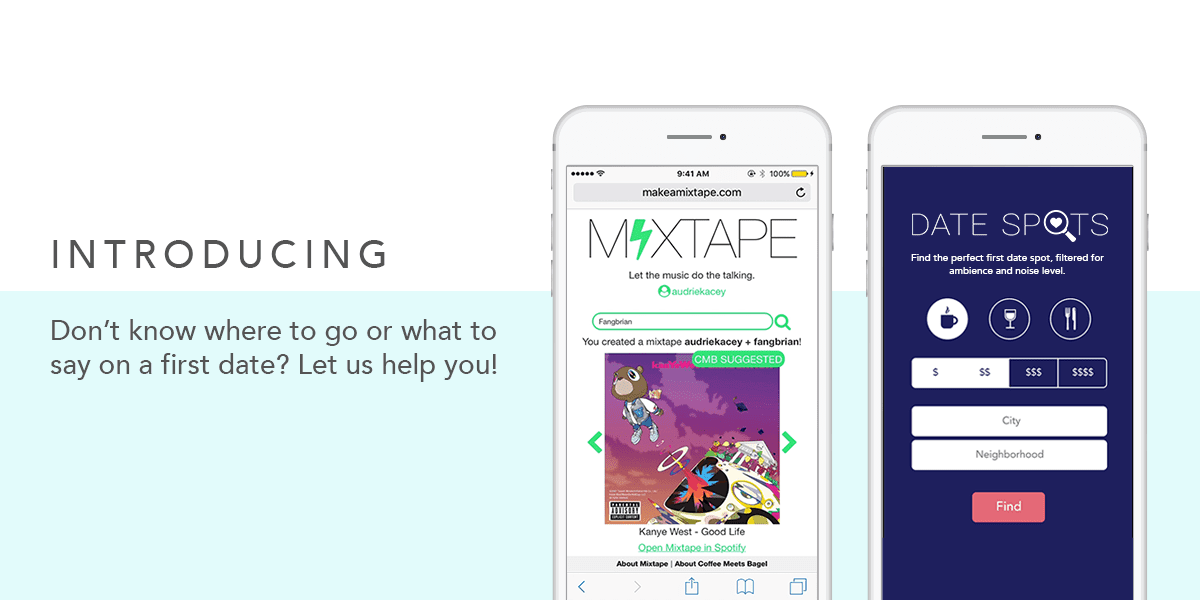 Coffee Meets Bagel (CMB) is expanding our service beyond helping people discover others online to include ways to actually drive offline dates. Why? The majority of singles use dating apps because they actually want to go on dates or be in a relationship (78% of surveyed CMB users!), but current online/mobile dating services are completely lacking in servicing this part of the dating funnel. As CMB’s focus has always been to make more meaningful relationships happen, the natural next step for us was to expand into what happens after two people connect online. So with this in mind, we’re launching a series of web apps geared at facilitating successful offline dates. The first two, called Mixtape (makeamixtape.com) and DateSpots (datespots.co), are powered by Spotify and Yelp, respectively.

Why are we launching this now? January is THE BEST time for online dating because it’s on top of a lot of people’s mind. Online dating is like the fitness category when it comes to New Year’s Resolutions. Many singles are thinking about how to find a new beginning and a new relationship in 2017. I call it cuffing season in full effect. In January 2016, we saw a whopping 62% increase in the number of matches on Coffee Meets Bagel vs. December 2015.
Click here for screenshots for the two web apps
Click here for full press kit
About Coffee Meets Bagel: Coffee Meets Bagel is a highly curated dating service where women call the final shot on who gets to talk to them among guys who expressed interest. We help singles find meaningful relationships by providing an experience that reflects the different ways men and women approach dating. Globally, we have generated more than one million dates and thousands of lasting relationships. Visit https://coffeemeetsbagel.com to find out more.