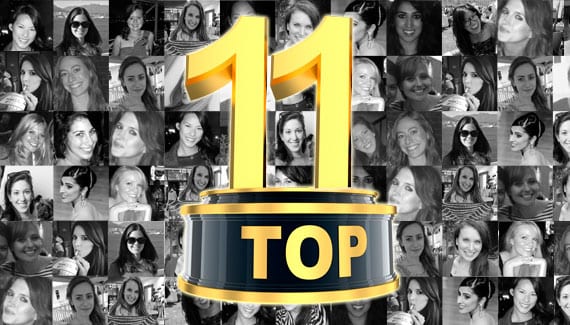 Springtime is just around the corner, and what better way to spend your beautiful days than to be in love? Let’s take a look at some of the Coffee Meets Bagel ladies that were taken off the market recently. Whether it was their gorgeous eyes or their killer smile, these are the 11 beautiful women we are heartbroken over. Don’t get us wrong, we’re totally happy for them and their Bagels, but just give us a few moments to lament the ones that got away

Don’t get too sad if you like what you see! Coffee Meets Bagel has a lot more Bagels in store for you. It could be you or your Bagel on this list next time….
1. Neha from Boston, declared unavailable March 9, 2014.

Occupation: Wedding Planner
Only appropriate that this wedding planner is off the market! That;ll probably be the best wedding ever!
3. Lauren from NY, declared unavailable January 26, 2014.

Occupation: Corporate Lawyer
This brunette has brains and beauty, no wonder she’s taken!
4. Kelly from LA, declared unavailable in January of 2014.

Occupation: Outreach Counselor in a non-profit
She reached out and sealed the deal!
10. Hannah from NY, declared unavailable on September 12, 2013.

11. Caleigh from NY, off the market in February of 2013. Declared super unavailable (engaged!)

Occupation: Health Care Integrator
A puppy-loving gal that helps people for a living? Can’t go wrong here! P.S. Love the CMB shirt ;)
Even though these gorgeous ladies are off the market, there are still plenty of bagels still out there! Don’t lose hope!

***All photos have been published here with our members’ permission. We do NOT publish members’ photos without an explicit permission from them.
About Coffee Meets Bagel (CMB): Every day at noon, we introduce you to one single with whom you share mutual friends. You have 24 hours to LIKE or PASS your match (aka “Bagels”). Mutual LIKE leads to direct connection via text message on a private phone line.

Orgasms - Not Business As Usual

How Things Change Between Date 3 And Date 30

13 Things Your Date Isn't Telling You (But Wishes You Knew)