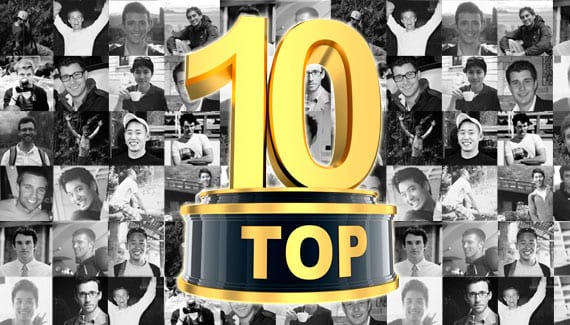 As we close out 2013 let’s take a look at some of the Coffee Meets Bagel guys that were taken off the market this year. Whether it was their gorgeous eyes or their killer smile, these are the top 10 guys we are most heartbroken over. Don’t get us wrong, we’re totally happy for them and their Bagels, but just give us a few moments to lament the ones that got away ;)
Don’t get too sad if you like what you see! Coffee Meets Bagel has a lot more Bagels in store for 2014. It could be you or your Bagel on this list next year….
1. Adam from SF, declared unavailable on Feb. 6, 2013 Occupation: Lawyer
The verdict is in: this cutie lawyer is oﬀ the market as of 2013! Occupation: Business Operations
His ability to rock both business and casual looks took him oﬀ the market this year. Occupation: Student
He’s working it with a tiger to look cute and strong. Occupation: Engineer
We’d love to go on adventures with this guy! Occupation: Lawyer
We’re heartbroken, yes, but this cutie’s just so happy, we can’t help but be happy for him too!
**All photos have been published here with our members’ permission. We do NOT publish members’ photos without an explicit permission from them.
About Coffee Meets Bagel (CMB): Every day at noon, we introduce you to one single with whom you share mutual friends. You have 24 hours to LIKE or PASS your match (aka “Bagels”). Mutual LIKE leads to direct connection via text message on a private phone line.

3 Tips for Starting Conversations at a New Years Eve Party