You are here: Home / Date Stats / What Having A PhD Means For Your Love Life 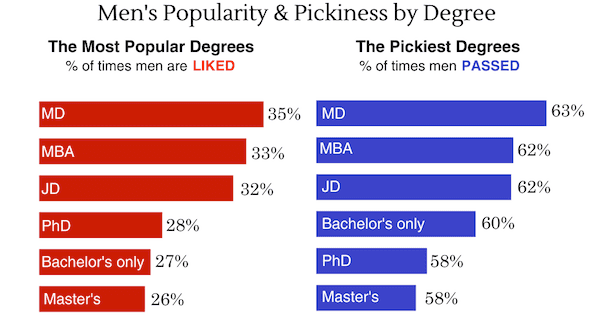 Here at CMB, we know that our users are intelligent — you’re smart enough to have chosen us after all! Joking aside, what you may not know is that we are indeed, statistically, a favorite among highly educated professionals. Believe it or not, over 35% of our member base has a master’s degree or higher. Compare that to the national average of people with master’s degrees or higher at 12%, you guys are a bunch of smarty pants!

Naturally, we were curious to see if having a graduate degree, or other further degree, has any correlation to a member’s attractiveness and preferences. We looked at over 20 million matches and here’s what we found. Let’s start with the dudes.

Sorry dudes, looks like your PhD isn’t helping you out much in the dating world. It could be worse though, but you also deserve mad props for being the second most open to LIKEing your bagels. What it looks like is that more general degrees (i.e., PhD, Master’s, Bachelor’s) are getting liked the least, which I think might have to do with their lack of specificity — you could be studying anything from dance to chemical engineering, so your area of study is probably more important to bagels than your level of degree. So keep on trucking, keep on learning, and hang that degree with pride! As always, men and women are as different as Miley Cyrus and Taylor Swift, and our study proves no exception. Men didn’t seem too hot for the women holding professional or other higher degrees; in fact, they preferred ladies who only have their bachelor’s degree!!! So essentially ladies, all of those extra years of school you endured were totally useless as far as your dating life is concerned. The good news is, we don’t think this is a sign that men don’t find high achieving women attractive — after all, female MDs were the second most liked. My hypothesis? Maybe the issue here is more related to age. Naturally, if you have a PhD, you’ve been in school for quite a while and are thus significantly older than a recent undergrad graduate, and you know how those men love those younger women — I’m totally rolling my eyes right now.

What’s interesting is that women holding only undergrad degrees were also the pickiest, followed again by MDs. I guess popular groups just have a sixth sense about these things and know they can be picky, but what fun is being picky? By being as open as you are (third least picky!) you guys are meeting a more diverse group of guys to banter about your dissertation with, so keep it up and don’t let the haters get you down.

What’s Trending In The Profiles Of Bagels With PhDs?

Realizing that the type of degree someone holds has a clear impact on their attractiveness, I was curious if there is a distinctive way people with different degrees present themselves on their profiles. Are there words or phrases that are commonly used amongst bagels with PhDs?
We loved how OkCupid conducted a similar study (but with race), so we emulated their methodology in this study. We looked at all of our users who have a PhD’s profiles and isolated words and phrases in their profiles that were used most frequently. The results? Check out the chart below. FYI – For those of you who are not familiar with Coffee Meets Bagel, here’s an example of what a member’s profile looks like on Coffee Meets Bagel (this is mine). The words used in the last three sections of the profile are what we used for this study. Our members with PhDs mentioned a bunch of words relating to academics, which makes sense. I mean, you decide to dedicate your life to studying one specific thing, it’s probably important enough to you to mention it in your dating profile, no? But you guys also have a bunch of totally random shared interests: croissants? squash? wizards?!? Also, does anyone know what the heck “flipping” is? Urban Dictionary is telling me it’s either a term related to drug use, a slang word for “doing the deed,” or the act of stealing the contents of someone’s backpack. Something tells me that’s not what you doctors of academia are talking about.

We can’t be totally sure what’s going on here, but it sure is interesting. Overall, it looks like men are into ladies with less smarts than them (frowny face), and women lust after doctors and businessmen. What do you think? Leave us comments, especially if you have any idea what the heck “flipping” means.

If you liked this post, check out The Biological Reason Why He Or She Is Just Not That Into You.

SF 49ers vs. Baltimore Ravens: Who is beating who on Coffee Meets Bagel

Getting Over a Breakup with Calvin Harris

9 Stages of Falling In Love

The Creepy Guys of Online Dating

So You Passed The Bar Exam, But Do You Pass The Bar In The Dating Game?