You are here: Home / Date Stats / Stretching The Truth: Do Lesbians And Gay Men Lie About Their Height? 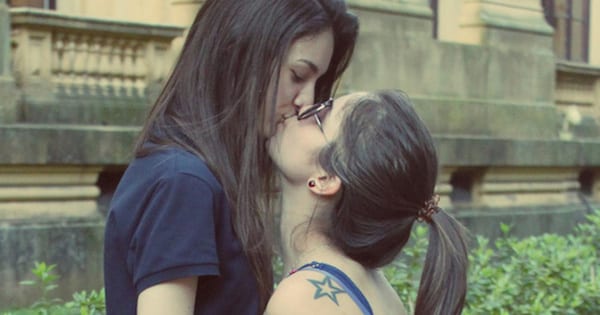 Everyone pretty much knows the importance of being tall when dating in the straight community. It explains why so many lie about their own height in online dating. But what about among gay & lesbians? Does being tall make you more attractive or less appealing? Do they lie about their height too? By analyzing thousands of interactions between Coffee Meets Bagel’s gay men and lesbians, we have the scoop on how height affects attraction for same-sex couples. (Take a guess before you read the rest!)

All Men Lie (but some lie more than others)

On average, the gay men of CMB say they are 5’9.7″ tall; in comparison, according to the National Health and Nutrition Examination Survey, men in the United States between the ages of 20 and 39 are only 5’9.5″ tall. This difference, albeit small, is significant at 1% using a t-test. So either the gay population on CMB is just taller than the average men in the US, or they exaggerate their height slightly. It’s probably the latter but that’s ok because this just proved that gay men lie less than straight men!

To find out, we need a model.

Hot as he is, I don’t think he has the answers. A statistical model, on the other hand, can tell us how often gay men like their Bagels, depending on both of their heights. (ok, bad joke – sorry – at least he is nice to look at). We can illustrate this with a few hypothetical guys of particular heights.

Gay men like men who are at least as tall as themselves: if his Bagel is shorter than he is, each inch shorter decreases the odds of being liked by 7%. If his Bagel is taller than he is, this increases the odds of being liked by less than 1%. As a Bagel, being taller than your match is not much better than being his height, but being the same height is preferable to being shorter.  The vertices in the plot represent the point where each guy is the same height as his Bagel; you can see that each of the three guys likes Bagels to the right (taller) better than Bagels to the left (shorter). Let’s look at this for gay men of all heights.

Gay men prefer their Bagels to be at least as tall as they are (above the line), and dislike it when their Bagels are shorter than they are (below the line). Given this, does it make sense for gay men to lie about their height? Saying you are an inch taller than you really are doesn’t make you that much more attractive to guys who are already shorter than you, but it does make you more attractive to a guy who is really an inch taller than you. This is because with the fib, the two of you are now the same height. That is, until he finds out that you lied about your height. What else did you lie about, hmm? Now it’s lesbians’ turn; do they lie about their height? if they do, does it make them more attractive?

How much do women lie about their height?

Yes: women exaggerate too! Straight women exaggerate about the same amount (half an inch) as straight men, while lesbians exaggerate by more than an inch. This extreme exaggeration makes sense only if lesbians strongly prefer tall women. Then, they would have the same reason to lie as men: it makes them more attractive to their desired partners. And since height is generally considered a valuable characteristic, this seems pretty plausible. To find out if lesbians really do prefer tall women, we’ll use another model and illustrate it with a few hypothetical women of particular heights.

Hold the phone: lesbians of all heights prefer short women! If her Bagel is shorter, each inch shorter increases the odds of being liked by 4%; if her Bagel is taller, each inch taller decreases the odds of being liked by 2%. Also note that the lines are parallel: short women are more picky about their Bagels than tall women, because they know they are popular and can afford to be selective. This same pattern holds for lesbians of all heights: no matter how tall she is, she prefers the shortest bagel possible. This is just like straight men’s preference for women’s age: the younger, the better, no matter how old he is.

But this is totally backwards: why would gay women inflate their height, if their partners like shorter women better? I’m going to skate over to some seriously thin ice, but hear me out. Maybe this is the result of variation in gender identity. People who identify as more masculine may prefer shorter partners, while people who identify as more feminine may prefer taller partners. If this is the case, and if height is a masculine trait, then the exaggerated height and the preference for short people imply that CMB’s lesbians may identify more strongly with a masculine gender identity. There is some evidence that shorter gay men are more likely to be bottoms and taller men are more likely to be tops, but this certainly doesn’t prove anything about lesbians. This is just my own wild guess: as a heterosexual, married man, I am pretty clueless. Please leave a comment to tell me this is totally bogus, and why you think lesbians exaggerate their own height, yet prefer shorter women.

Can everyone win in musical chairs? or will someone be left out in the cold?

In my previous post, we found that straight men and women have mutually compatible preferences: they both like the man to be taller. Are gay men’s and lesbians’ preferences similarly compatible? Or is it like musical chairs, where someone will be left out when the music stops? Gay men like taller men, but not much more than men their own height; therefore, if every gay man had a Bagel his own height, everyone would be happy. Even if it doesn’t work out that way, it’s at least possible that everyone gets what he wants – in terms of height, at least. However, lesbians are unique in uniformly preferring short Bagels, no matter how tall they themselves are. Does this mean that no one will date tall lesbians? Not really, because lesbians’ preference for short women is extremely weak. To show this, I measured “strength of height preference” as the Euclidean distance between two numbers: the change in odds of Liking if a taller Bagel is 1” taller, and the change in odds of Liking if a shorter Bagel is 1” shorter. This summarizes each group’s preferences for taller and shorter Bagels from two numbers to one, allowing an easy visual comparison.

Straight women have far and away the strongest preferences about height, while lesbians have the weakest. This is good news for tall lesbians; if all lesbians insisted on having a short partner, the tall ones would be out of luck. Fortunately for them, lesbians rely mostly on factors other than height in evaluating their Bagels. If you enjoyed this post, check out how straight men and women feel about height.

Meet the Bagels of Toronto

15 AAPI-owned spots to support on your next date

The Appeal Of Higher Education: How Your Graduate Degree Stacks Up In The Dating Game

This Gay Texting Guide Gives You the Low-Down

The Bagels Of Hong Kong: Who Are They?
Scroll to top