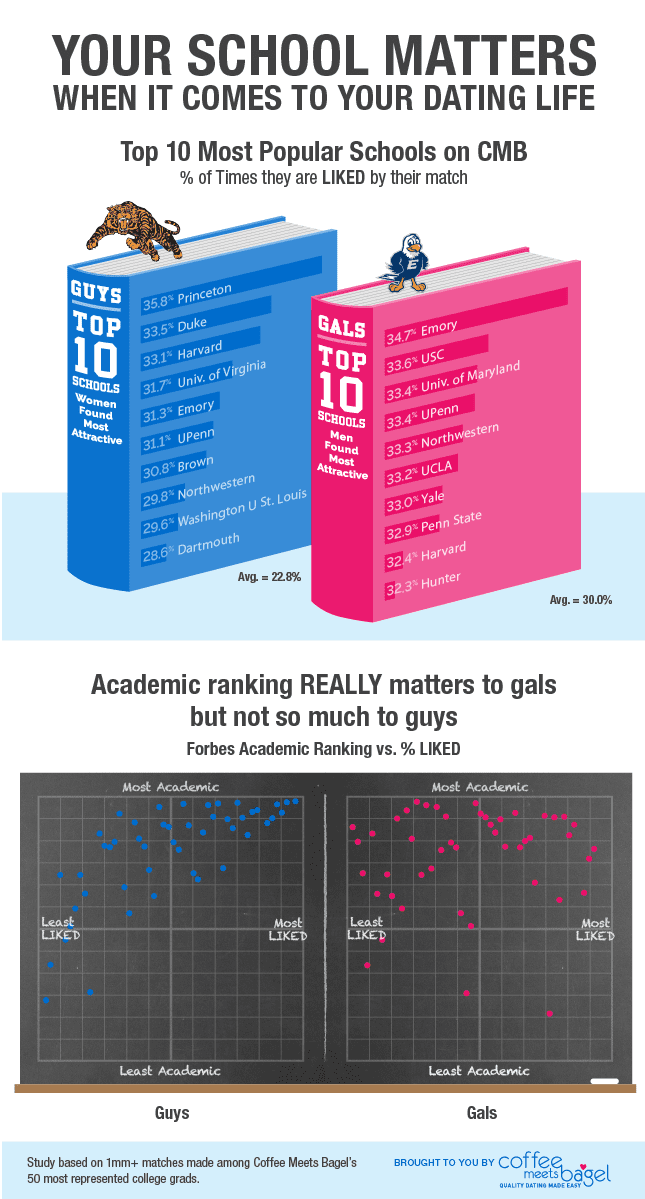 Do you remember the letter that Susan Patton wrote to the editor of The Daily Princetonian called “Advice for the young women of Princeton: the daughters I never had”? (If you haven’t, read it now! It’s not to be missed).

Her advice to the Princeton freshmen ladies was to find a husband while they are at school because they “will never again be surrounded by this concentration of men who are worthy of [them]”.
She argues that while men are forgiving about “a woman’s lack of erudition, if she is exceptionally pretty, smart women can’t (shouldn’t) marry men who aren’t at least their intellectual equal.”
It’s now September and that means back-to-school season – which got me thinking – as infuriating as it is, is Susan’s argument true?  Are women better off trying to find their partners while they are still at school? And, more specifically, does your Alma Mater really matter when it comes to dating? Welcome to Dating Myth #3.
Top 50 most represented schools on Coffee Meets Bagel
In order to answer this question, we first took a look at the top 50 most heavily represented schools on Coffee Meets Bagel, and ranked each one based on their “popularity” as defined by % of times each alum was LIKED by their Bagels.
We then narrowed it down further to the 10 most sought after schools among men & women on Coffee Meets Bagel – look who came out on top.
Ironically, women seem to prefer gentlemen from Princeton the most–is this some freaky coincidence or is there really just something special about Princeton men?  Regardless, based on the data, all you Princeton guys out there should probably keep your student IDs handy when you’re going on dates. Couldn’t hurt.

School’s popularity and its academic ranking

Is it a pure coincidence that most of these top 10 schools are universities with the strongest academic programs in the nation? Generally, in my experience as a statistician, the word “coincidence” is simply shorthand for “missing correlative data”.  So, using Forbes’ Academic Ranking, I decided to actually map out the relationship between a school’s popularity & its academic rigor, for both men & women.
And voila, the results were quite revealing.
Here is what the graph looks like for men: 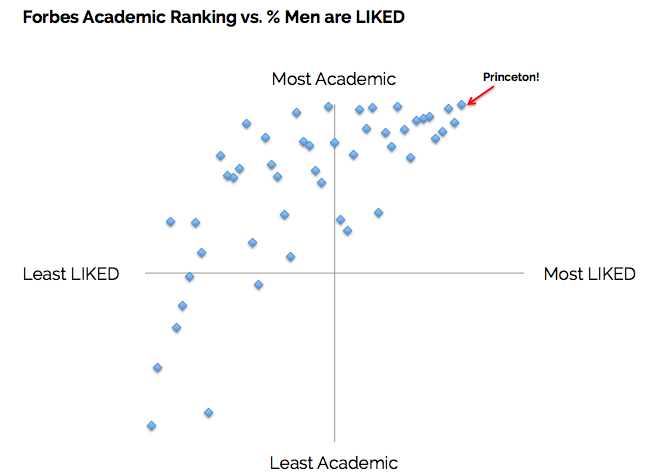 And here is how it looks like for women: 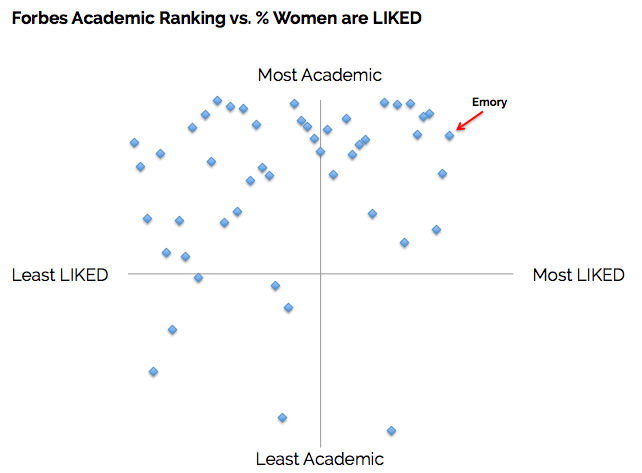 I think these two graphs say it all – yes, gentlemen – your alma matter does matter to the ladies. Generally speaking, the better your school, the better your chance of getting dates. See, women value intelligence and they use your alma mater as an indicator of how smart you are.  We’re tricky like that.

(Side Comment: I used absolute Forbes ranking to create this map and note the concentration of dots in the upper half of the quadrant – Most Academic  – ain’t we fancy!)

Wait, does this mean that Susan Patton was right? Does this mean I need to go back to school and get my MRS degree to find a good husband?
Definitely not, if you ask me. Yes, intelligence matters but that’s such a small piece of the entire equation. To me dating is about finding somebody we’re truly compatible with, somebody who “gets us”, challenges us, surprises us. That means knowing who we are and what we want. I don’t know about the rest of you but back in college I barely knew what classes I wanted to take the next semester, much less who I wanted to spend the rest of my life with.
So yes, I’m sure Princeton is a great place to find a date but I’m also pretty sure that Susan Patton never heard of Coffee Meets Bagel.
See you out there.
Dating Myth #3: Does your alma mater matter when it comes to dating?
Answer: Yes and No. It matters to women but not so much to men.

About Coffee Meets Bagel (CMB): Every day at noon, we introduce you to one single with whom you share mutual friends. You have 24 hours to LIKE or PASS your match (aka “Bagels”). Mutual LIKE leads to direct connection via text message on a private phone line.

Dating Statistics: Attractiveness across the 5 boroughs of New York

Here's How Your MBA Is Affecting Your Love Life

So You Have A Master's Degree, But Are You A Master Of Dating?

8 times when Snapchat is better than texting
Scroll to top