You are here: Home / Date Stories / A Boy Named Boob 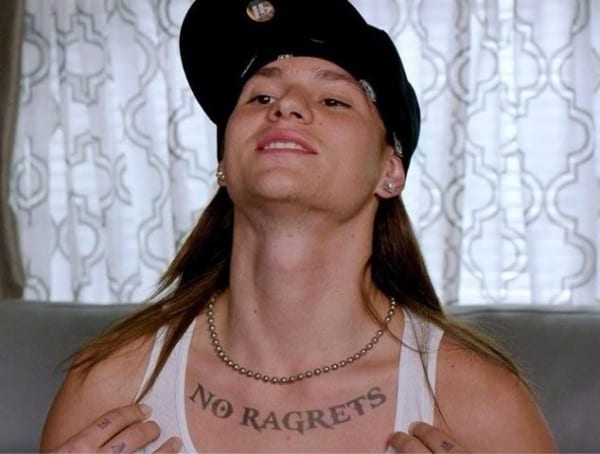 I first “met” Bobby online, as tales of woe so often start. Really none of us can say we “met” someone online as I was soon to find. No one is ever who they project. The liberties allotted to the online public in their presentation of self is one of the greatest crimes of 21st century dating. That shit needs to be monitored. I had reached a point in my dating trajectory where I realized that online profiles give little to absolutely no indication of any degree of reality whatsoever. And so despite pictures that toed the line of “I guess that’s not terrible, is that animal taxidermied?” I found that I had nothing to lose and everything to gain. Perhaps this was the love of my life, but perhaps this person in a closer bid to reality was nothing like his profile. And to be honest, that wasn’t so bad. I’d dated magnificent profiles only to find them horrible. I’d met mediocre profiles only to find them quite enjoyable. So in a move I’d like to brand research, I decided to see what happens when you go for broke and just head out with someone whose profile is at best average, and at worst contains innovative ways to use mud.
Upon arrival I was nonplussed. And that was fine. This was essentially research thus far, and the guy was nice enough. Our first attempt at a bar went afoul when the wait was an hour, so he suggested we head to a place his friend bartended. We headed in, and I was actually fairly relaxed. I was explaining my date drink of choice (cider and guinness) and he was explaining the hierarchical system of becoming a fireman in Boston. To which I stupidly replied “Yeah, I know, right?” as if I know about being a fireman in Boston. Bobby didn’t seem to care. It wasn’t until I was several drinks in that we somehow we got on the topic of roommates.
“I just moved, so I have two new roommates,” I said.
“Oh really? I have two roommates, too! What do your roommates do?”
“One works at MIT and one is in grad school.”
“That’s classy. Mine are doing better now.”
“What does that mean?”
Friends, let’s talk for a tic. I want to point something out- that phrase “What does that mean”. I have gotten more answers from people that I genuinely never wanted to know by inadvertently uttering this phrase. Never say this unless you have no other choice. It can only end in absurdity.
“One was dealing crack, know what I’m saying?”
Of course I didn’t know what he was saying. Does anyone REALLY know about crack other than people that use crack? “Use” probably isn’t even the right term, I’m so not a crack person. Sure, I make the crack references we have all come to enjoy. IE “Oh man, I can’t have even one diet coke, that stuff’s like crack!” But do I really “know” crack? Are you nuts? I’m from the burbs of Pittsburgh, PA. Crack isn’t our forté. It’s not even our pianissimo. So in an attempt to be tactful while also confused as to whether it was better or worse to let on that I wasn’t a crack aficionado, I deftly replied-
“What? You mean like, REAL crack?”
No, Ingrid. Fake crack. It’s all the rage.
“Yeah!” he contined. “And then the other one kept pimping people out of the house-”
“Bobby. I’m sorry. I don’t understand, you lived in this place? This place was not jail?”
“Haha no, it’s really funny!”
“No, but it’s not though.”
Bobby wasn’t quite understanding why I didn’t think it was hilarious that his apartment was a haven for hard drugs and prostitutes. Sometimes simultaneously. In an attempt to change the subject to literally anything else, I looked down and noticed that he had a whole bunch of tattoos on his arm.
“What are your tattoos?”
What was it I was expecting to find inked on the arm of a man that enjoyed living in a self-imposed brothel? Had I no sense of what I was about to delve into? Had I lost all of my (read: VERY) limited street smarts? Calamity.
“Well, so these down here are Tim Burton characters from all his movies. Here’s Frankenweenie…”
“Ah. That’s nice.”
It was ridiculous enough looking down and seeing THIS happening on someone’s arm…

But then I saw something on his upper arm that caught my eye.
“What’s that one?”
There really was nothing that could’ve prepared me for what he was about to show and tell me next. No amount of grace and grammar school I never attended, nor the crack/pimp primer episode could have untwisted my face and kept in my very loud awkward laugh. He rolled his sleeve up to reveal the biggest tattoo of a name I had ever seen in person, extending down over half of his arm. The name in question?

“Bobby. Does that say… Booby?”
“Yeah! I love it. All my friends call me Booby!”
“But Booby, sorry Bobby, your name is Bobby.”
“Right, but everyone calls me that, it’s great!”
So many thoughts were passing through my mind:
*Was he drunk when he got this?
*Was his tattoo artist drunk when he got this?
*Am I now part of the ‘everyone’ that must call him ‘Booby’?
*Can I do that with a straight face?
*I can’t stop singing A Boy Named Sue…
“And I think about him, now and then,
Every time I try and every time I win,
And if I ever have a son, I think I’m gonna name him
Bill or George! Anything but Boob!”
And then I burst out laughing. Apparently a little too loud, because the next thing I knew, a group of my guy friends from grad school were heading in my direction. There was nothing to do but grab the boob by the horns.
“Booby. Hold on, I’ll be right back!”
I got up and jogged like an asshat over to my friends, not really thinking about what to say but trying to prevent any kind of contact closer than ideally 250 feet.
“Hi guys! So funny seeing YOU here, yeah great. So I am on a date with someone from a crack place named Booby, and honestly I’d really just like if we could all just hang out over here.”
“Ingrid, what are you even saying?”
“Great, cool.”
My life.
After Boobs and I left, had our awkward don’t call us we’ll call you and I got on the train, I wondered out loud what the hell had just happened and if it should go in my eulogy. And I wondered, could this be more ridiculous than it already is? But the answer would come merely a week later, with a resounding YES….

Stay tuned, my friends. The plot thickens, as they say.

What to Do When Your Boyfriend is Still Online Dating