You are here: Home / Date Tips / For Her / Meet a Real-Life Bachelor: Dave Gutierrez 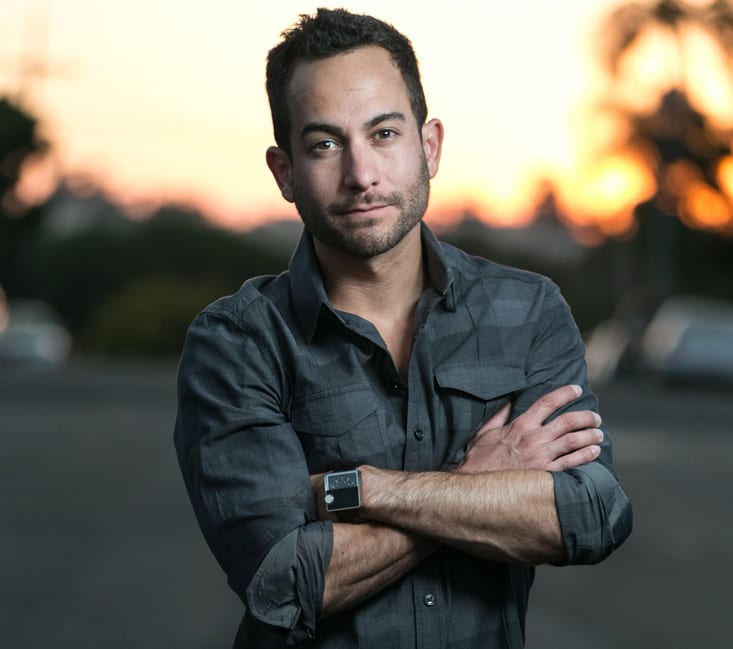 Remember that post I wrote about So-Cal bros? Well, Dave isn’t one of them.
Even though his last name is a nightmare to spell and pronounce, he’s a good guy.
If you’re into witty banter, coffee shops, and peanut M&M’s — you’ll love Dave.

Age: 34
Occupation: Program Manager, Sony Network Entertainment
Interests: My interests are a little all over the place. I’m a writer. I’ve been playing drums for 25 years and have bounced around in a couple bands. I do a little spoken word here and there. I’m just getting into acting and was cast in my first play recently. It’s a totally new adventure for me and I’m having a blast doing it.
If I’m not working or doing something creative, I like to get out and be active – hiking, mountain biking, or going for a long ride on my motorcycle.

WHAT DO YOU WISH MORE WOMEN UNDERSTOOD ABOUT MEN?

While I tend to object to the idea of men being simple in the “stupid caveman” sense, I do think more women need to know that on a communication level – men are painfully straightforward. We’re fixers. We’re logical. Even the neurotic ones (which I can tend towards) are neurotic because we’re being overly logical.
So, if you want something from a guy – be it a date, an answer, a foot rub, or anything – just ask for it.
Don’t hint.
Don’t imply.
Ask. Clearly.
At our core – at least for the good dudes out there – we want to please. We want you to be happy. We are just genuinely in the dark in how to do it a lot of the time. If you make it clear for us, we will go to great lengths to achieve it. We’ll climb mountains and slay dragons. We just need a little help to know which mountains and which dragons.

WHAT DO YOU WISH YOU COULD UNDERSTAND BETTER ABOUT WOMEN?

I want to know why so many women get in their own way when it comes to love.
It’s staggering to me how many women I have been friends with or dated that find a good guy with all kinds of potential – and their go-to move is to analyze all the reasons they shouldn’t give it a shot. Maybe it will ruin the friendship. Maybe it will be weird for their ex-boyfriend/girlfriend. Maybe your best friend already called dibs. Maybe you’ll be taller than him in heels. Maybe maybe maybe…
Maybe just stop.
Because maybe it will all work out. Maybe it will be amazing. Maybe it will be the best relationship you ever had. And even if it isn’t – better to have given it an honest shot than to have cut it off at the knees just for the sake of a bunch of unlikely maybes, right?

WHAT IS YOUR APPROACH TO DATING?

I don’t know that I have an approach. Could be that’s part of why I am single – beyond the fact that a part of me really likes being single. If I meet someone and think I like them, I’ll ask them out and see where it goes. Sometimes that may be one date, a short romance, or a long term relationship.
I like to think I’ve gotten my season of hooking up or directionless dating done with. That said, I’m not longing to find a wife either. I tend to live in one of two extremes: overly intentional or completely aloof.

HAVE YOU ONLINE DATED?

WHAT DID YOU LIKE/DISLIKE ABOUT IT?

There’s no denying the convenience of it. It’s nice to be able to pick someone, strike up a conversation and set up a date all from my desk or couch or wherever I happen to be.
On the flip side, I’m learning that dating and relationships are at their best when they’re organic – when they evolve from acquaintance to friend to dating to wherever it goes. Online dating expedites the process and plays into our superficial sides. No matter how much personality one tries to put into their profile, it’s going to come down to “do I think this person is physically attractive” every time.
Don’t get me wrong – attraction is absolutely key in a relationship. But we need to be careful of what we are letting ourselves deem “attractive” – if it’s solely, or even primarily, a person’s outside aesthetic, then I think we have a problem.

WHAT IS YOUR STRATEGY TO GET A GIRL’S NUMBER?

I’ve never been scared of talking to girls – or anyone for that matter. If I think a girl looks good, I’ll tell her. If I like what she’s wearing, I’ll tell her. If I want her number, I’ll ask for it. If I want to take her out, I’ll call her.
This isn’t to say that I don’t get rejected with this approach. I do. Plenty. But the reality of rejection isn’t nearly as painful as the perception of it. And it has a remarkably short half-life.

DO YOU LIKE WHEN A GIRL ASKS YOU OUT, PLANS A DATE, OR PAYS FOR DINNER?

I am totally flattered when a girl asks me out. I largely consider myself a feminist, and I’m naturally attracted to strong personalities. A girl that is willing to come after me is already starting out with some bonus points.
Same goes for planning dates. I’m a sucker for that kind of stuff. I’m a big planner. I think it shows a girl you respect her and her time when you show up with a plan – and hopefully one that goes beyond dinner and a movie. So when a girl turns the tables on me and plans the date – it knocks me back a little bit, in a good way.
As for the paying, this is where I get a little old-fashioned. I have a hard time letting the girl pay. I don’t know what it is, but I just struggle with it. Unless it’s my birthday. You can pay for me on my birthday.

WHAT NON-PHYSICAL CHARACTERISTICS DO YOU FIND ATTRACTIVE?

Humor. Hands down. When guys say that, it usually means he wants a girl that thinks he’s funny, but that’s not the case with me. I want a girl that makes me laugh. That sees the humor in everything. A girl that just naturally looks for the joke in the conversation. Life is wildly unpredictable, and even unfair – if you aren’t coming at it with a good sense of humor then I probably won’t want to go through it with you.
Beyond that, intelligence. A girl that is bright, well-read and aware of the world around her. That has her opinions on issues, art, faith, and culture and can back up those opinions. Oh man. That is all kinds of sexy.

Self-centeredness. It usually doesn’t take long in a relationship to figure out if someone is all about themselves. And it’s such a turnoff.

WHAT IS YOUR GO-TO DATE?

You never do the same date twice. That’s cheating. And in San Diego, there’s always a new date to go on. That said, I do like Hotel Del Coronado. They have a killer bar, outdoor patio, the beach, some funky shops to wander. It’s kinda foolproof.
There’s an old screenwriting adage that says something like, “Remember, it’s a movie – you can do anything.” I tend to feel like that with dating. You can do anything.

DO YOU BELIEVE IN SOULMATES?

Not really, no. I love the idea of it, but I think I believe in commitment more.  My parents were married when they were 16 and 19 and they’ve been married 43 years now. I have aunts and uncles married 20 years, cousins married 10 years and friends married just a couple years. And nowhere in any of those marriages do I see the idea of “soulmates” carrying them through the hard times. I see commitment, communication, selflessness and relentless love. I see whole lot of hard work.
I guess that’s what I want more than a soulmate – somebody real to do the hard work with.
But we can call all that hard work “soulmates” – it sounds better.

Having Trouble Logging In On Android?

The ONE Profile Picture You Cannot Do Without.
Scroll to top