You are here: Home / Date Tips / For Her / Dating Advice for That One Annoying Single Friend

Everyone has that one annoying single friend they absolutely love and adore but can’t stand at the same time because of her stubbornly single ways. You know exactly the type I’m talking about — the type that always makes it a point to mention the fact that she’s single (still), refuses to settle for anything less than she deserves, and is always posting self-validating memes and other things single women like to post on their social media feeds.
Like this: 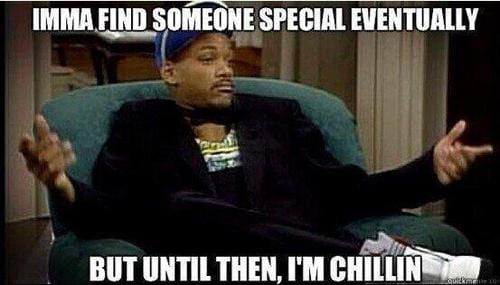 That’s what they all say. 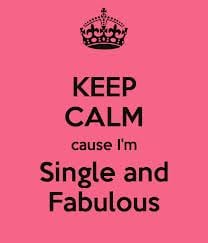 And then she’ll post this on a Friday night, while updating her online dating profile:

Remind you of anyone you know?
Maybe (gasp) yourself?
If I could go back in time and give my fresh-out-of-college self some simple, yet profound dating advice, here’s what I’d tell myself.
Stop wearing your single status like a badge of honor.
Who do you think you are, the Mother Teresa of singles? Being single is not an identity. It’s a relationship status. Whether single or taken, it does not define you. But your actions and behavior do, and you may not like what yours say about you.
You deserve nothing. No one owes you anything.
Men seem to think they’re entitled to a woman’s body if they pay a woman’s way. Conversely, women seem to believe they’re entitled to a free meal if they give a man the time of day. This sense of entitlement that dominates today’s dating culture is crippling your dating life by making you an invalid.
Ditch the expectations in favor of realism.
False expectations only lead to disappointment. Unless you like being disappointed — or frustrated — don’t expect someone else’s idea of a relationship to be the same as yours. Unmet expectations kill relationships. No one likes the pressure of living up to unrealistic expectations. Keep it real.
Get over yourself and your selfish approach to relationships.
Instead of always taking about what you want in an ideal partner, how about drawing some of that attention onto what your dream guy would want in his dream girl? Consider what you bring to the table in a relationship rather than what someone else has to offer you. Relationships aren’t all about you.
Stop validating yourself by the men that don’t want you.
Doing so will only perpetuate your fear of not being good enough for anyone. You don’t need a man, or anyone outside yourself, to be happy. There are not enough men in the world to negate the most reliable source of validation you could ever have — you. Don’t ever let anyone define or validate you.
Relationships are only as complicated as you make them out to be.
There is nothing complicated about two people expressing their intentions for the other to accept or reject. If the person you’re dating wants to keep seeing other people, you’re either okay with it or you’re not.  The real complications happen when people don’t talk about the implications of conflicting intentions.
Practice sportsmanship in dating.
I know you hate to think of dating as a game, but it is, and you need to be in it to win it, or accept being a loser. Just don’t be a sore loser. Take your loss like a champ, learn from your mistakes and move on. Every new dating experience is like a whole new ball game, and a new chance to win that relationship you’ve been craving.
If you like this post, consider reading about 9 things I learned about breaking up.
About Coffee Meets Bagel (CMB): CMB  is a free dating service that helps members make meaningful connections. It’s designed for busy singles who want to find something real with little or no effort.

Dating & Location: Appreciate Where You're From

The Double Dot
Scroll to top